Some of the Sandy Hook families were in a Waterbury courtroom Tuesday, while state officials were at the state Capitol speaking out against a recent lawsuit challenging the 2013 law that bans some semi-automatic rifles and limits magazine capacity.

“This is not a fight that we choose. Nobody wants to be here,” Attorney General William Tong said at the state Capitol. “Unfortunately this great tragedy, this suffering, this loss, is part of who we are.”

They said lawsuits like this one are “manufacturing controversy” and state representatives will fight to protect Connecticut’s gun control laws.

Click here to read the full article at FOX61. 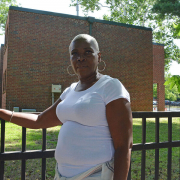 For Janet Rice, the Sheldon Oaks Apartments in downtown Hartford, Connecticut, hold a lot of memories. This is where her son Shane took his first steps. It is also where, almost two decades later, he took his last steps.

In October of 2012, Shane Oliver had just started a small business fixing up and reselling used cars. He’d gone back to the Sheldon Oaks with his girlfriend to pick up the remaining balance on a sale. A fight broke out. Mr. Oliver, then 20 years old, was shot and killed.

Click here to read the full article in the Christian Science Monitor.