While we all want to keep our families safe, the facts are clear: guns do not make us safer, and they won’t help protect us from the coronavirus. Some people feel safer with a gun, but the simple truth is that they or one of their family members are more likely to be killed by that gun than be protected from a criminal assault.

The evidence is overwhelming: access to firearms in the home is associated with increased rates of homicide and suicide, as well as unintentional death and injury, particularly of children.

Every day, eight children and teens are injured or killed in the U.S. due to unlocked or unsupervised guns in the home. Contrary to their parents’ beliefs, most children know where guns are hidden in the home.

With schools closed and children at home, the risk of unintentional gun death and injury will be higher.

Multiple studies have found that access to a gun in the home increases the risk of suicide. Over 80% of child firearm suicides use a gun belonging to a family member. Guns are up to 11 times more likely to be used in a suicide than for self-defensive use. During a time of significantly heightened anxiety over economic security, it is likely the risk of suicide will increase. Adding more guns into the mix is not prudent.

Women are five times more likely to be killed when a domestic abuser has access to a firearm (and there is no clear evidence that having a gun protects female victims from their abusers). Under the current circumstances, when large numbers of people are confined to their homes and levels of stress are increasing dramatically, increased access to firearms will put women (and their children) who are in abusive relationships at higher levels of life-threatening risk.

The argument for deeming gun sellers as “essential” is presumably based on protecting the right of self-defense. But studies show that the widespread use of firearms for protecting against criminals is a myth. Based on data from the National Crime Victimization Study, fewer than 1 percent of crime victims use a gun for self-defense. More important, using a gun for self-defense is no more effective than other measures, such as calling 9-1-1 for help. But a gun in the home does have dangerous unintended consequences, being more likely to cause an unintentional shooting, an unprovoked assault or homicide, or a suicide, than they are for the exceedingly rare occasion that it is used in self-defense.

If a child is going to someone else’s home, parents should always ask if there is a firearm in the house, and if so to be certain that it is stored locked and unloaded. The question should be asked for all children, including older teens whether they are hanging out with friends or going to a home for work such as babysitting.

Seek an Extreme Risk Protection Order if someone may be at risk of suicide.

In the coming months, family members, co-workers and neighbors will be under extraordinary stress. For some, that could lead to considerations of suicide. The presence of firearms in the home increases the risk of suicide by orders of magnitude. CAGV wants people to be aware that if they know someone with access to firearms who may be at risk of imminent harm to themselves or others, and voluntary efforts to prevent access have not worked, call 9-1-1, explain the situation and ask to get an extreme risk protection order (ERPO). If the threat is imminent, the police can apply for a protection order to remove the firearms.

A brochure explaining Connecticut’s ERPO as a means of preventing firearm suicide is available from the CT Against Gun Violence Education Fund at bit.ly/cagvedfund_erpo_brochure3-13-20rev1-1

When it comes to safe storage, irresponsible behavior among gun owners is sadly commonplace. More than half of all gun owners store at least one firearm unsafely—without any locks or other safe storage methods. Nearly five million children live in homes with at least one loaded, unlocked firearm.

That’s why last year CAGV worked to pass two laws to strengthen safe storage requirements, at home and in unsecured vehicles. As the past two weeks have made clear, these laws are needed to serve as a deterrent and to motivate responsible gun storage behavior.

Earlier this month a Stratford man was charged after his Glock was stolen from his unlocked truck. Just this week, an unsecured semi-automatic handgun with ammunition was stolen from the Stamford home of a mother with three young children; she was charged with violating Ethan’s Law. That law requires firearms in homes with children under age 18 to be securely stored whether they’re loaded nor not, spurred by the tragic death two years ago today of Ethan Song. He was unintentionally shot and killed at his friend’s home with the father’s unsecured gun.

This reckless behavior isn’t unusual. Last December a Norwalk police officer was charged with reckless endangerment after two rifles, one of them an AR-15 style assault rifle, were stolen from his unlocked car. They were later found in the possession of a convicted felon.

Unsecured guns do more than put children at risk in their homes. As these cases demonstrate, improperly stored guns get stolen, putting the public at risk, especially on the streets of urban communities.

We’re proud of the work we did together with you and our gun violence prevention allies to promote responsible gun ownership. Very shortly I’ll be sharing with you the details of our legislative agenda for the session that begins next week. Our focus is on combatting community violence and preventing firearm suicide, the two leading causes of gun deaths in Connecticut.

With your continued advocacy, we intend to have as much success this year as we did last year.

Thank you for all you do to keep Connecticut safe from gun violence. 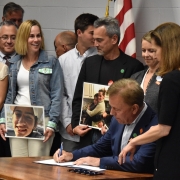 Often we hear “criminals don’t follow laws” as the reason for opposing gun laws and “just enforce the laws we have” for not strengthening the laws we have. So here are three recent examples where the existence and enforcement of Connecticut’s strong gun laws very likely saved lives.

Extreme Risk Protection Order (ERPO) prevents possible mass shooting
Just days after the El Paso and Dayton mass shootings, a young man from Norwalk called his aunt in New Hampshire, telling her that he was making an assault rifle and wanted to use her address so he could ship high-capacity magazines to her, since they are illegal in Connecticut.

Knowing her nephew’s troubled history, the woman contacted the Norwalk police. Following an investigation that established a strong presumption that he was at imminent risk of harming people, a judge issued a “risk warrant” allowing law enforcement to remove firearms from the individual’s residence. Police found hundreds of rounds of ammunition, multiple firearms, a hand grenade and four 30-round magazines. The man was charged with four counts of illegal purchase of a high-capacity magazine. Read the full story here.

Gun trafficker sent to prison for seven years
Learning that a former Bridgeport man was advertising his willingness to sell firearms he purchased (illegally) in Georgia, the ATF set up a sting operation. The man was arrested because he was a convicted felon and thus prohibited from possessing firearms.

Earlier this month the man was sentenced to seven years in prison. He admitted to selling at least 30 guns in Bridgeport (most likely, not to “law abiding” gun owners). The case was part of Project Safe Neighborhoods, a program aimed at reducing community violence. Because Georgia has notoriously weak gun laws, it is much easier for prohibited individuals to buy guns there than in Connecticut, further evidence that gun laws work. Read the full story here.

Arrested for leaving an unsecured handgun in a vehicle.
A Stamford gun owner left an unsecured gun in his unlocked car on the night of September 30 from where it was later stolen. Under the measure that CAGV supporters helped to pass just this year, which came into effect the very next day on October 1, the man was charged with a misdemeanor count of unsafe storage of a gun in a motor vehicle. Read the full story here.

Smart gun laws save lives and our laws are being enforced.